Are you considering trying out ice fishing this winter? Many ice fishers consider trout to be one of the best types of fish to go after once you’ve drilled a hole in the ice.

However, there are many different types of trout, and each variety is susceptible to a certain technique of baiting and capture.

In this article, we’ll familiarize you with some of the most important facts regarding how to lure and catch the trout that swim below the thick ice under your feet.

Lake trout are some of the most highly sought-after prey for veteran ice fishers and newbies alike.

These fish are among the most common types of trout, and they are easy to catch if you know what you’re doing.

Lake trout remain plentiful during the winter, which means that you’re likely to catch a hold of one of these beauties if you head out on the lake between November and March.

Certain types of lures and methods are more effective for catching lake trout than others, and in the following sections, we’ll provide you with some pro tips to help you hook one of these big, beautiful fish.

Various types of lake trout are present in almost every lake in North America. To find an ideal lake for ice fishing for lake trout, you may want to enlist the services of a local guide.

Wherever you go that lake trout are present, however, you’ll find that these fish stick to certain areas of lakes.

According to In-Fisherman, lake trout tend to frequent areas of lakes called flats.

These areas are places in lakes where the lake bottom is more or less even with the surface of the lake.

You can find a flat on a frozen lake by consulting an underwater topography map or measuring the distance to the bottom from multiple holes in a small area.

Once you’ve found a flat area in a lake, you’ll need to make sure that it’s the depth that active lake trout prefer.

These fish usually stay in flats that are between four and eight feet deep. Flats of this depth are usually found near the banks of a lake, and they can extend outward for 100 yards or more.

Less active lake trout, however, tend to drop down to lower areas in a lake. If you’re looking for trout that aren’t actively feeding, they can usually be found in flats that are 20 or 30 feet in depth.

In lakes without flat bottoms, lake trout generally suspend to a depth of about six feet below the surface of the ice.

No matter which lake you fish on, you’ll find that lake trout tend to frequent areas where the lake bottom is soft instead of rocky.

How Big Is a Lake Trout?

Lake trout are some of the biggest fish that you’ll find in freshwater environments.

Most freshwater fish don’t get much heavier than six to eight pounds, but lake trout can easily exceed 50 pounds in large lakes.

According to World Fishing Network, the largest lake trout ever found weighed a whopping 102 pounds.

This incredible size makes lake trout a truly challenging fish species to wrangle at the end of your line, but if you have the muscle mass to reel one in, a single lake trout could potentially feed you for days or even weeks.

In terms of length, lake trout are usually about 14-17 inches long. However, trout that live in larger lakes can sometimes be up to 3.5 feet in length.

What Is the Lifespan of a Lake Trout?

How Deep Are Lake Trout During the Winter?

The winter ice doesn’t affect a lake trout’s daily habits all that much. Whether you’re fishing for lake trout from a boat during the summer or trying your luck through a hole in the ice, you’ll still find that these trout like to hang out about six feet below the surface.

Cold temperatures can, however, alter the feeding habits of lake trout. While these fish spend a lot more time actively hunting for minnows near the surface in the summer, lake trout tend to stick toward the bottom of the lake for longer chunks of the day in the winter.

Equipping yourself with multiple types of bait will help ensure your ability to successfully catch lake trout no matter where they happen to be within their preferred depth.

What Is the Best Lure for Lake Trout?

According to Happy Day Lodge, which is an established fishing lodge in Ontario, quite a few lures are effective for catching these huge trout.

In addition, Happy Day Lodge also suggests that you might have good results if you use Blue Fox Spinners, Vibrex Spinners, or Sutton Silver Spoons the next time you seek out lake trout under the ice.

“Presentation” is the term used by ice fishers to designate the way in which you present the bait to a fish.

A novice might believe that simply sticking your bait in the water is an effective technique, but there’s actually a lot more to the art of attracting lake trout.

Most ice fishing experts, including the folks at Ice-Fishing-Source.com, recommend that you attract lake trout with a motion called “jigging.”

This presentation is accomplished by raising the tip of your rod about a foot in the air and then dropping it back down.

When you complete this rod maneuver, your bait will jump up and down like it’s dancing.

This simple motion tricks lake trout into thinking that your bait is alive, and it will shake them out of their cold-induced stupor.

Ice-Fishing-Source.com also points out that it’s okay to hit the bottom with your bait, but that you shouldn’t hit bottom frequently.

Lake trout only close in on bait once it stops moving, so you’ll need to stagger your jigging in order to achieve the maximum possible effect.

When jigging, the best practice is to raise and drop your rod once and then wait for a few seconds before repeating this maneuver.

Switch up the intervals that you leave your bait motionless to make sure that you simulate the movements of a real fish.

Brown trout are also commonly sought-after by ice fishers. According to In-Fisherman, brown trout usually stick around areas of rivers with soft bottoms, and they can be up to 36 inches in length.

Even in slow rivers, brown trout tend to stick to the current, so effective positioning is the best way to hook one of these prized fish.

Do Brown Trout Feed at Night?

According to Bass Fishing Gurus, brown trout do indeed feed at night. However, the feeding habits of brown trout don’t seem to be impacted much by diurnal cycles.

Since ice fishing at night can be a dangerously cold business, it might be the best idea to seek these fish during the day.

What Is the Best Bait for Brown Trout?

In addition, insects like hellgrammites have been shown to be effective in luring brown trout.

Lastly, some ice fishers have met with success by using small fish like sculpins to attract brown trout.

When the water in a lake is less than five feet deep, rainbow trout tend to hang out near the lake bottom.

However, these trout tend to inhabit the middle of the water column when the water is deeper.

Rainbow trout are among the most active types of trout, and they like to stick around weedy coves.

Since these types of trout are the primary predators in their environment, they are highly susceptible to bait presentations like jigging. Some expert ice fishers use 1/16-ounce jigs with Gulp! Minnows as bait.

Rainbow trout are also highly aware of their environments, which can make dragging your bait along the lake bottom a deadly technique.

This motion simulates the way an insect looks as it emerges from the lake bottom, and it will draw rainbow trout like a magnet.

When you go ice fishing, you’re visually limited to what you can see through your hole in the ice, which makes some ice fishers believe that ice flashers are effective tools.

These devices have dials on the front, and these dials change color when the beam of the flasher encounters an object.

Seasoned ice fishers can determine the type of object that has been encountered by the appearance of the dial.

Ice Fishing for Trout with Nightcrawlers

Nightcrawlers are commonly used when boat fishing, but many fishermen might unreasonably shy away from using this type of bait when on the ice.

However, it’s been shown that nightcrawlers can be highly effective when used as bait for trout on icy lakes.

Some ice fishers have even reported that trout will sometimes only be attracted by Nightcrawlers.

Whether or not you end up using this type of bait during your time on the ice, packing some night crawlers on your expedition will never be a mistake.

There are many different ways to rig your line for ice fishing. Most ice fishers prefer types of bait like tiny spoons and jigs when luring big fish like trout.

In addition, veteran ice fishers also always carry along a few different types of swimming rigs as an alternate presentation.

Putting live bait on your lure can be a surefire way to snag a big predator like a trout.

Also, adding a spring bobber to the end of your rod can help you produce a lifelike motion when you jig your line under the ice.

There are tons of videos on YouTube that are designed to help novices catch trout on their first ice fishing trip. One video called Ice Fishing: Catch Trout In MINUTES! has amassed over 10,000 views.

This video breaks down a tried-and-true method for catching trout while ice fishing. In less than nine minutes, this informative guide by GetBentTV covers every single step you’ll need to take in order to hook a trout of your dreams.

While trout are certainly worthy game to seek under the winter ice, some fishing fans might rather set their eyes on the pike. Some ice fishers who specialize in pike absolutely swear by lipless cranks.

These crankbaits are considered to be some of the most effective types of search baits on the market, and they are painted in bright colors to attract the attention of pike.

These baits rattle, and they sway back and forth like real fish.

Lipless cranks are available in many different colors, and any color will do for ice fishing.

The best policy is to purchase a multipack and try out each variety for yourself. Here’s a link to one of the most popular multipacks on Amazon.

This item is made by RUNCL, and it is a pack of five unique lipless crankbait designs.

At the time of this writing, this item is available for $14.66, and it is eligible for free one-day Amazon Prime shipping. 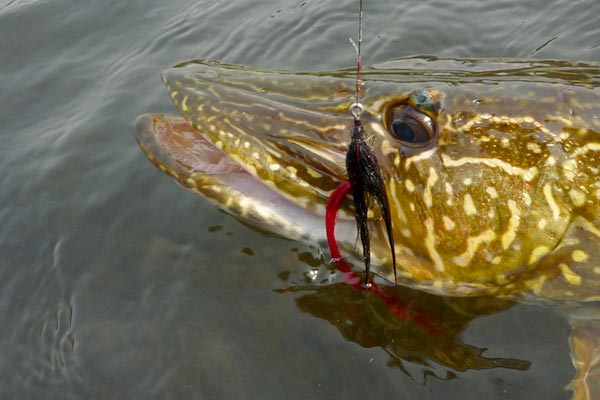 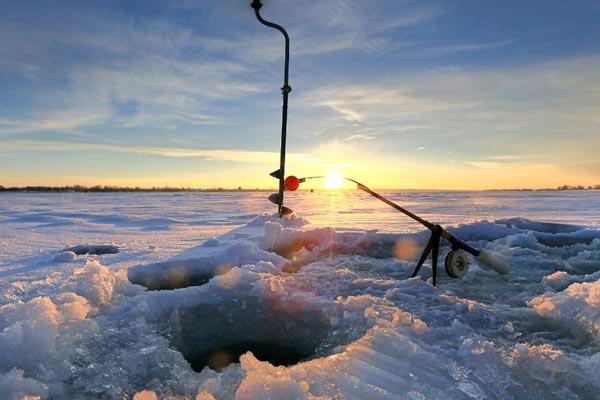