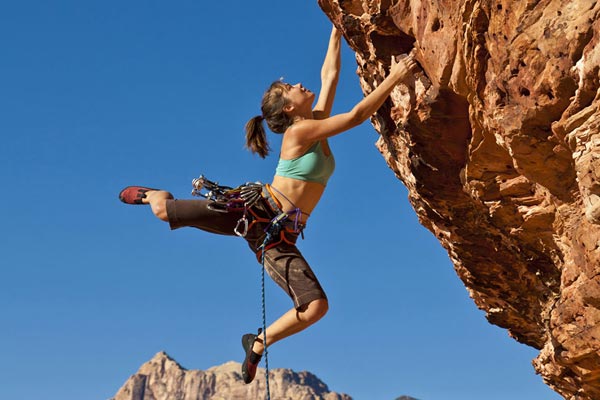 Rock climbing serves as an enjoyable hobby that benefits physical fitness for many people nowadays.

Methods range from harmless rock walls for kids to perilous procedures that only the best can take on.

With so many ways to participate, you may be wondering what kinds of climbing styles are out there.

Today we will be highlighting the essential elements of rock-climbing methods.

Often referred to as alpine climbing, mountaineering has been around longer than any type of rock climbing.

This is commonly thought the be an adventurous method, which is portrayed by National Geographic in outlandish locations like Patagonia and Everest.

While it used to only refer to the climbing of actual mountains, the terms have since expanded to apply to some types of indoor rock climbing.

In certain areas mountaineering is referred to as “Alpinism”. The use of this term puts forth the implication that those involved climb with minimal equipment on snowy and icy surfaces. Alpinists emphasize minimalism and the technical qualities of the climbing experience.

People who attempt mountaineering are recommended to have experience and a comprehensive skill-set because the process can be dangerous.

While free-solo climbing is considered less safe, mountaineering comes with prospective hazards such as avalanches and the falling of ice that you depend on for a grip as you climb.

Trad climbing, short for traditional climbing, is a method based on older practices.

This form of climbing can involve one person or a group of several people, which is highlighted by the Alpine Institute.

When several people are trad climbing together, a leader typically leaves behind supports such as pitons for the following participants.

Contrary to mountaineering, this method involves far more gear to prevent you from falling.

The term “traditionalist” is used to refer to those who trad climb. Traditionalists usually emphasize qualities such as exploration and the preservation of nature.

They typically rely on classic devices such as pitons for support, which are far less harmful to rock surfaces than contemporary support methods like bolts.

Many different pieces of protective gear are available for traditional climbers. Five main devices tend to be implemented:

Another popular method of rock climbing is the sports method. Sports climbing is heavily dependent on anchors and sometimes bolts that prevent possible dangers.

This differs from trad climbing in that the supports are permanent. Traditional climbers rely on temporary, removable items placed on the surface as they climb

As the International Climbing School indicates, the main emphasis of sports climbing is on the climber’s technique and athletic ability rather than the risk factor that comes with other methods.

It serves an option for more skilled participants who wish to rock climb without the stress that comes with traditional climbing or free soloing.

Although outdoor sports climbing was the popular route in the past, many now prefer to do it indoors.

This transition occurred due to increased access to indoor walls and gyms. In addition, many see outdoor sports climbing as unethical due to the heavy use of support bolts that damage natural rocks.

Since sport-climbing methods do not rely on spots in the rock where protective devices can be placed, they tend to take a straightforward, linear path.

They are extremely direct in comparison to traditional climbing routes, which can be winding and a bit difficult to follow in certain situations.

In addition, this process typically involves a landing pad called a bouldering pad in case of unexpected slippage.

The usual settings for bouldering are replica boulders in rock-climbing gyms and natural boulders that fit the needed criteria.

Many who partake in bouldering prefer to wear climbing shoes that help them step into footholds, although this is not a requirement.

Additionally, chalking your hands can be helpful in achieving a firmer grip on holds.

Shown by means of a case study by the Australian Journal of Outdoor Education, this popular method of rock climbing has a particular drawback.

Bouldering is known to negatively affect the environment because participators often hike off-trail to reach suitable natural boulders. This is the cause of undesirable soil erosion and crushed vegetation.

With regard to technique, successful bouldering relies heavily on the footwork of the climber.

For optimal results, you should use the muscles of your arms to keep yourself balanced and keep a proper body positioning.

The legs, however, do the heavy lifting for boulderers since leg muscles are so much stronger than those in arms. You should keep your legs on the rock and use them to progress yourself upward toward the climbing goal.

Also called top roping, top-rope rock climbing is the common method that can be done at events such as carnivals and fairs.

A supportive rope runs from the rock climber to the ground where he began his trip. An anchor system powers this process and tends to be hooked up to the participant through a harness.

Slipping up during top-rope climbing does not cause a fall all the way to the ground. The climber should fall a very short distance, usually matter feet, and be able to re-establish a grip on the wall.

By use of this system, completion of a rock wall is much more leisurely and lacks the danger of other methods.

Displayed by IRCS Cliffhangers, this tends to be the most frequently used rock-climbing method for those with minimal or intermediate experience.

Typically, top roping is performed on rock walls that are not able to be lead-climbed.

Moreover, this is the most frequently utilized method for indoor facilities due to environmental impact.

Similar to sports climbing, many choose not to partake in top-rope climbing outdoors due to the effects on nature.

Free-solo climbing, also referred to as free soloing, is the simplest method to understand and by far the most dangerous.

The climber utilizes no protective gear or preventative measure, and he uses strictly his natural ability.

Free soloing is a broad term and can technically apply to practices such as tree climbing.

A fall during this process is a fall to the ground, as many deaths have been documented in the past due to failed free-soloing attempts. It is not recommended for anyone, and those who succeed do it probably have years of experience and substantial physical ability.

CBS News highlighted the risk factor and the extreme risk factor that comes with free-solo climbing in the ascent of Alex Hannold.

In this video you can view the prospective fatal dangers that a free climber faces as well as the the experience and skill needed to carry out such a task.

With such an apparent chance of fatal results at hand, many wonder what drives people to participate in free soloing in the first place.

Some highly trained climbers take part in the authenticity of the experience; it can be done simply and quickly. Hannold, for instance, scaled 2224 feet in only 2 hours and 30 minutes.

Other motivations lie in the extreme challenge and risk-based excitement that it brings about.

Many trained climbers enjoy the adrenaline rush that it delivers since so much is at stake during a climb.

As expressed, rock climbing is an activity that comes with vast possibilities. It can improve physical fitness, reduce stress, and simply give you something productive to take part in.

Whether you prefer to stay in the comfort of a facility or adventure through nature, rock climbing is a hobby that likely an option for you. 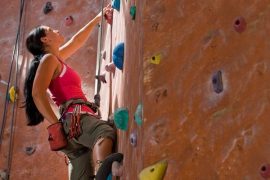 How to Get Better at Rock Climbing